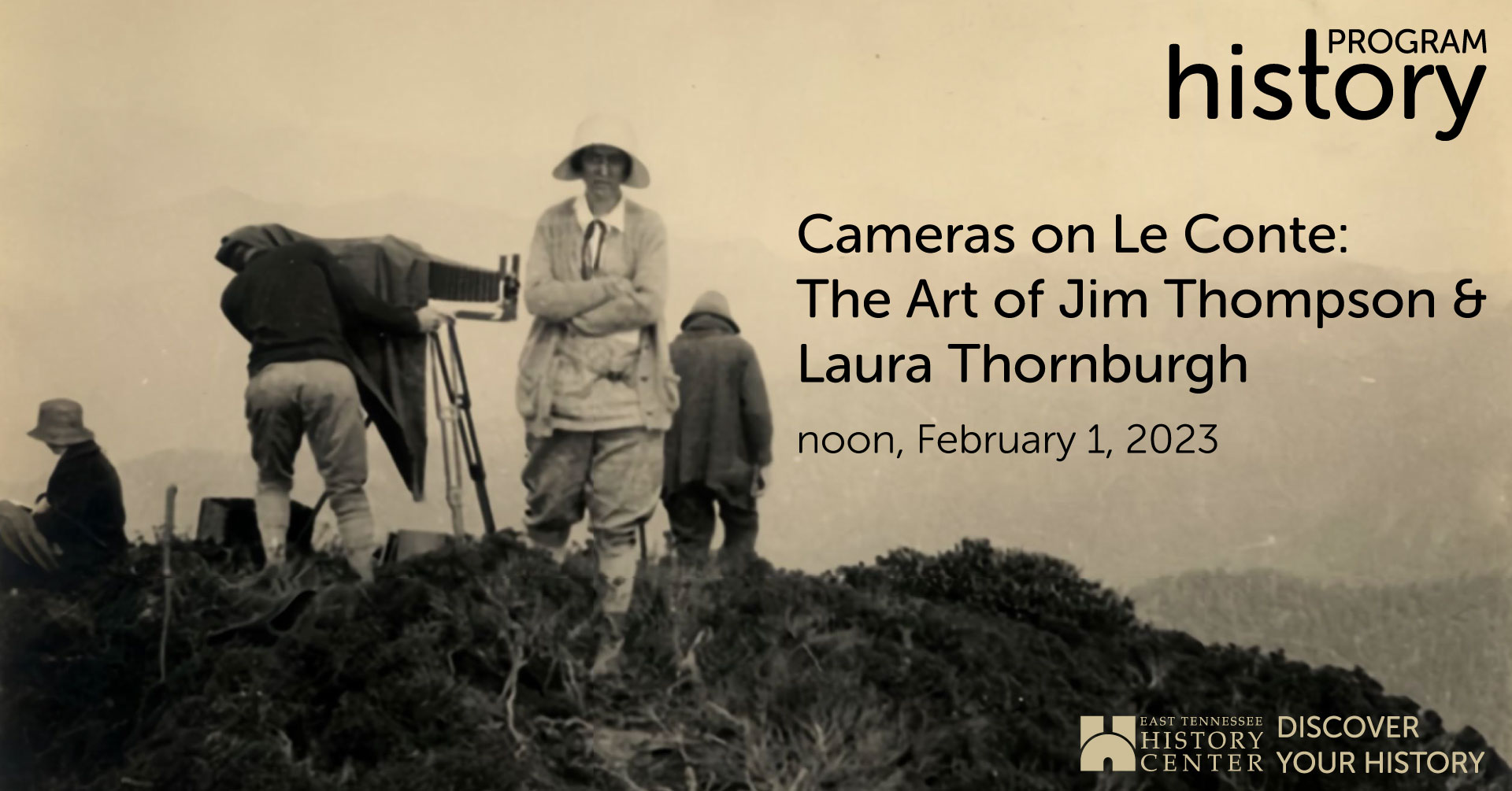 “What is there to see in the Great Smokies? That depends upon what you want to see. These are the friendliest mountains in the world, and offer a never-ending series of surprises for those who visit them.” – Laura Thornburgh

In 1925, Assistant Director of the National Park Service Arno B. Cammerer ascended Gregory Bald on a special investigation to build the groundwork for what would become Great Smoky Mountains National Park. Accompanying him were members of the Smoky Mountains Hiking Club, including Knoxvillians Jim Thompson and Laura Thornburgh. Deeply invested in the Great Smoky Mountains, Thompson and Thornburgh used their photographic artistry to make the nation aware of its beauty. The two hauled their heavy cameras together as they trekked through the wilderness, capturing still and moving images of the mountains and its people.

Learn the stories of Thompson and Thornburgh and their art with a presentation by Tennessee Archive of Moving Image and Sound Archivists John Morton and Janine Winfree, featuring highlights of Thompson’s 16mm films as well as a lecture on Thornburgh’s life and influence in the world of motion pictures.

This program is free and open to the public; pre-registration is not required. The program coincides with the Museum of East Tennessee History's current exhibition, Lights! Camera! East Tennessee!

John Morton is Audio-Visual Archivist at the Calvin M. McClung Historical Collection’s Tennessee Archive of Moving Image and Sound (TAMIS), a branch of the Knox County Public Library system in Knoxville, Tennessee. John holds an Honors BA in English and Film Studies from Calvin College and an MA in English from the University of Rochester. John also holds certification in film preservation and archiving from the L. Jeffrey Selznick School of Film Preservation in Rochester, New York. He has conducted research on the role of parody in classic animation, surveyed and coded science fiction films for their sociological visions of future societies, helped index the world’s largest collection of contemporary Indian film prints, and completed a thesis on the repatriation of motion pictures as cultural heritage objects.

Assistant Audiovisual Archivist Janine Winfree is the newest member of the TAMIS team. A graduate of the University of Tennessee Information Science program, Janine earned her certificate in film preservation from The L. Jeffrey Selznick School in Rochester, NY. Her experience with archives spans internships and fellowships at UT Martin, Y-12 National Security Complex, Smithsonian Institution, National Film and Sound Archive of Australia, and the Great Smoky Mountains National Park. Previously, she was the Urban Renewal Project Archivist at the Beck Cultural Exchange Center. Janine may have grown up in Middle Tennessee, but she calls Knoxville home.