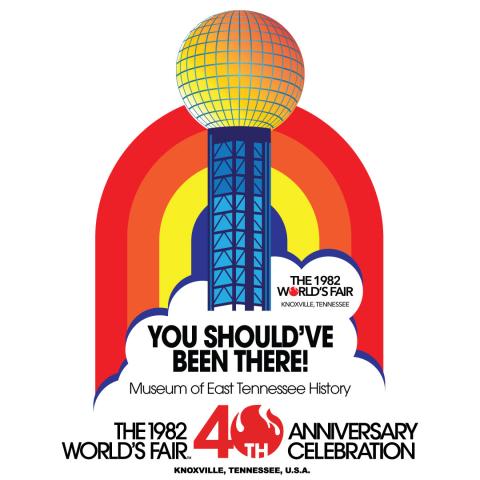 In celebration of the 40th Anniversary of the 1982 World's Fair, the East Tennessee History Center is hosting a new, one-of-a-kind exhibition "You Should've Been There!" from March 19 to October 9, 2022.

On view in the Museum of East Tennessee History, the exhibition’s theme is not only a nod to the international exposition’s marketing catchphrase, “You Have Got to Be There! The 1982 World’s Fair!” but also an acknowledgement that, four decades removed, there is a generation of East Tennesseans who were not alive to experience the historic event.

Organized by the Knox County Public Library and the East Tennessee Historical Society, “You Should've Been There!” traces the fair’s development from conception to the pivotal moment when The Wall Street Journal referred to Knoxville as a “scruffy little city” and questioned its ability to host an international event. More than 11,000,000 visitors from around the world were informed and entertained in the various pavilions, exhibitions, and attractions put on by 22 countries and some 50 private organizations. Popular souvenirs were shirts and buttons proclaiming, “The Scruffy Little City Did It!”

The fair’s theme, “Energy Turns the World,” played to the region’s reputation as technology and science center. For example, it was at the 1982 World’s Fair that users were able to try out a touchscreen for the first time. Elo, a Knoxville-based company, debuted the touchscreen technology, then known as "talk back" computers, in the United States Pavilion. To honor this spirit of innovation, “You Should've Been There!” incorporates engaging touchscreens alongside displays of original fair materials from pickle pins to deely boppers and everything in between.

"You Should've Been There!" is an official event of the 40th Anniversary of the 1982 World's Fair. To learn more about upcoming commemorative events, please visit: http://www.knoxvilleworldsfair.com.