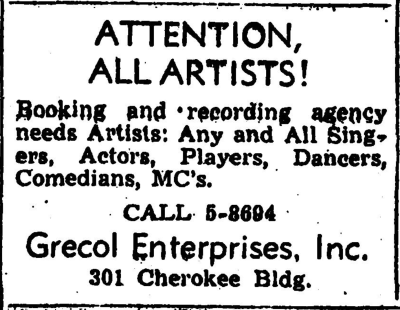 An intriguing sample of Knoxville’s musical heritage recently returned to the city when Calvin M. McClung Historical Collection employees bought a 78 rpm record from an eBay vendor to add to the collections of the Tennessee Archive of Moving Image and Sound (TAMIS), the audiovisual department of the McClung Collection. This well-preserved record contains two songs--“Swing Down Sweet Chariot” and “This World Is in a Bad Condition”--by the Royal Travelers, a beloved local gospel quartet that was active in Knoxville for decades.

While the Royal Travelers are familiar to fans of local gospel music, the circumstances of the recording itself are elusive. The label on the shellac disc credits it to Dixie Records, which is identified as a division of Grecol Enterprises, Inc., of Knoxville. Documentation of Grecol Enterprises, Inc., is scant with newspaper coverage of the company concentrated in April 1949. On the 14th of that month, the Knoxville News-Sentinel describes the company as “makers of phonograph records” and reports that Grecol had just set up shop in the Cherokee Building in downtown Knoxville. Grecol president and former WBIR announcer John S. Collins is quoted in this article, stating that his company will focus on regional folk, religious, and Western musical talent, with plans to expand into motion picture production for television exhibition.

The Knoxville Journal covered the Grecol beat as well. An April 24 piece on Grecol includes a photo of Collins, who seems to smile approvingly over the Journal’s summary of Grecol’s aspirations (which adds sheet music publication and transcription services to the audiovisual production mentioned by the News-Sentinel.) Additionally, this April 24 article reports that the Royal Travelers record is “scheduled to reach the market” in the following week, along with a record by the Derricks Singers featuring “Just a Closer Walk with Thee” and “He’ll Understand.”

The Journal coverage from April 24 concludes with the statement that Grecol Enterprises is Knoxville’s first recording company and first music publishing company. Whether or not Grecol truly was the first in these two cases, it seems to have been short-lived.  Amongst the paltry remaining clues to the company’s existence are notices for “Music and Madness,” a Grecol-sponsored show at the Horne Theatre in South Knoxville, that appeared in both newspapers on April 28, 1949. These ads state that Collins will MC the following evening for a variety of acts, including Ott and Watt, Pear and A Peach, the Rainbow Riders, and the Singing Saddle Pals. The Journal advertisement  promises “One Hour of Fun You Can’t Afford to Miss.” References to Grecol Enterprises disappear from Knoxville newspapers after April 1949, and John S. Collins’ entry in the 1950 Knoxville City Directory lists him as both president of Grecol and a representative of Tennessee Radio Service. The 1951 directory lists Collins as an employee of the Yellow Cab Company; in the 1952 directory, Collins is nowhere to be found.

TAMIS staff speculate that few copies of Grecol/Dixie Records titles were pressed and are unaware of the survival of any other Dixie discs. The Royal Travelers record is absent from such fan-curated, web-based record databases as 45cat, Discogs, and popsike. TAMIS’ copy had found its way to Baltimore, MD, before its homecoming jaunt to the East Tennessee History Center, just around the corner from the former Grecol office. The Royal Travelers disc has been digitized, and you can listen to it here: