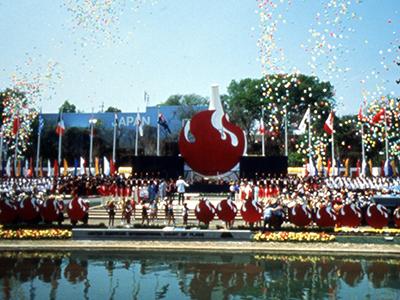 “All America can be proud of this world's fair that we open here today. ... Here in Knoxville, in the Tennessee foothills, the world will share its knowledge, accomplishments, and hopes for tomorrow. Americans welcome the world to Tennessee.”
–President Ronald Reagan, Opening Day of the Knoxville World’s Fair, May 1, 1982

Forty years ago today (May 1), the Knoxville International Energy Exposition–Energy Expo 82, commonly called the 1982 World’s Fair, opened its gates with participation by 22 countries and more than 50 private organizations and companies. Tennessee-born entertainer Dinah Shore acted as mistress of ceremonies. Included among the many dignitaries taking part in the extravagant opening-day celebrations were President Ronald Reagan, who dedicated the world’s fair on behalf of the host country and later that day dedicated the United States Pavilion. Also in attendance were Tennessee Governor Lamar Alexander, U.S. Senators Howard Baker, Jr., and Jim Sasser, the U.S. secretary of commerce, the U.S. secretary of agriculture, and the secretary general of the Bureau International des Expositions.

In an effort to thank everyone, opening remarks ran for more than hour, testing the patience of the sun-drenched crowd.

By the time the gates closed for the last time on October 31, 1982, more than 11,000,000 visitors had passed through the turnstiles and the fair was able to report a modest profit (purported to be $57.00;  the last debt bond was paid by the City of Knoxville in 2007). Knoxvillians took many memories and souvenirs away from the fair, but among the most popular items were tee shirts, buttons, or almost anything with the printed phrase–“The Scruffy Little City Did It!”

To mark the 40th Anniversary of Opening Day, more than 1,000 images from the 1982 World's Fair have been scanned and added to the Calvin M. McClung Digital Collection. In time, additional items will be added as the Calvin M. McClung Historical Collection is the official repository of the Knoxville International Energy Exposition. It also houses a number of unique, personal collections of photographs and memorabilia from "when the world came to Knoxville."