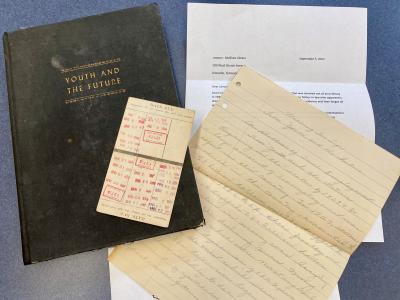 In the category of it's never too late, we received an interesting package in the mail this month.

A book entitled "Youth and the Future" made it back to Lawson McGhee Library after 76 years. But it looks like the book was well consumed in its day and provided some good wisdom for the reader. We're not sure if this is a record, but it certainly gave us a good chuckle. It was worth waiving the late fine!

The accompanying letter provided some insight into the reader:

Much to my embarrassment, I am returning a library book that was checked out of your library in 1946. I found it in the bottom of a box that belonged to my late father-in-law who apparently checked the book out, probably read it, put it in a box, moved his residence and then forgot all about it.

His interest in the contents of the book followed him through his life. He was very interested in youth organizations and in 1950 went on to work overseas where he was instrumental in organizing the first 4-H Club in Japan.

My Father-in-Law's name was Paul W. Rose. He settled with his family in Tennessee after World War II, worked with the 4-H Clubs in Tennessee and then was hired to go to Japan.

I feel that 76 years must be close to some record for an overdue book. Despite considering other options on what to do with the book, I thought that simply returning it along with a letter explaining who and why was the best thing to do.

NOTE: We feel certain he read the book as his hand-written notes were included in the pages. The kids of Japan were lucky to have Mr. Rose!