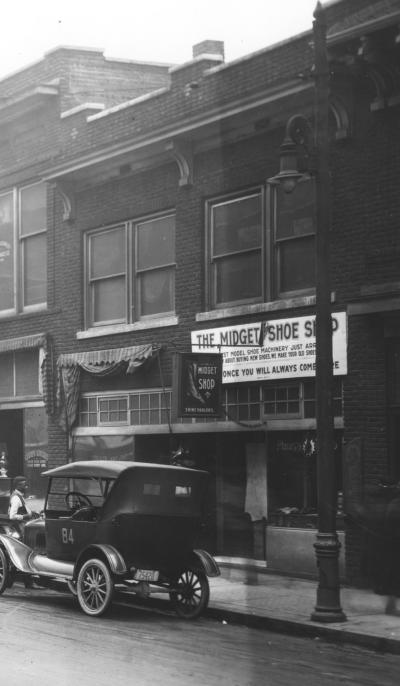 In addition to the thousands of history and genealogy books, the Calvin M. McClung Historical Collection preserves numerous original documents and family collections. McClung’s newly processed Midget Family Papers is a treasure trove of Knoxville and disability history. It tells the story of a Tennessee family who found success through entrepreneurship, hard work, and perseverance.

Harvey Gordon Midget was born on September 9, 1888, in Jennings, Tennessee, to George William Midget and Drucilla Smartt Midget. He began attending the Tennessee School for the Deaf around 1896 and graduated in 1905. He played both left end and halfback on the school’s football team that won the city championship in 1904, even beating Maryville College in a scrimmage on November 19. He also played right field on the baseball team.

Lucy was born on September 28, 1888, in Sumner County to Davis T. Suddarth and Nannie Majors Suddarth. Lucy attended the school from 1897 until at least 1907, where she participated on the girls’ basketball team.

After getting married, the couple moved to Nashville, where Gordon built ranges for Phillips, Buttorff and Co. They moved back to Knoxville in 1910, and Gordon began teaching shoemaking at his alma mater. In 1911, their only child, George Thomas Midget, was born. In 1918, Gordon and Lucy opened the Midget Shoe Shop at 109 Gay Street.

Articles from Knoxville's newspapers give glimpses of some happenings in the couple's life. On Labor Day 1934, Gordon was seriously injured when he was struck by a car at Inskip Racetrack. He remained hospitalized for nearly a month, receiving three blood transfusions. On Monday, January 19, 1942, a paste board sign fell against the stove at the Midget Shoe Shop on 109 Gay Street and ignited. The fire, and subsequent water, damaged the floor, walls, wiring, and skylight. Luckily the store was insured and ultimately repaired and reopened.

George T. Midget attended Knoxville High School, where he participated in drama. After attending a local technical college, he joined the U.S. Army Corps of Engineers. His work saw him stationed in places such as Fort Peck, Montana, and the Panama Canal. He died in 1977 in Florida but is buried with his parents in Manchester.

The collection contains many photographs, letters, receipts, World War II ration books, and even one of Lucy’s baby shoes!