Will A. McTeer & A. S. Tilden Family Papers 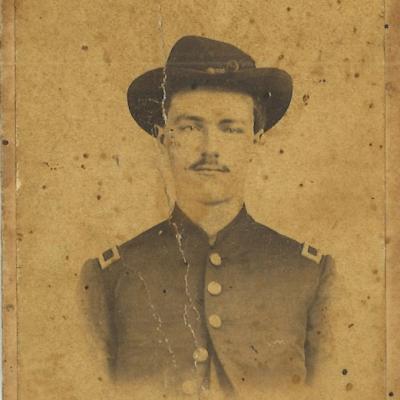 In 1784, Robert McTeer moved his family south from his home in Pennsylvania, and after a short stay in Virginia, settled in present-day Blount County, among the first white settlers in the area. A veteran of the Revolutionary War, McTeer built a fort and mill, as the Cherokee had yet to cede the territory to the United States. He amassed hundreds of acres of land in Blount County that he dispersed to his heirs at his death in 1824.

His son, William, was born in 1780, before Robert departed Pennsylvania. William married Mary McTeer in 1802 in Blount County. He served in Capt. Jehu Stephens company as 1st sergeant during the War of 1812. William’s first wife died in 1814, and he married Mary Bogle five years later, on September 16, 1819. Their oldest son Andrew Bogle McTeer was born on September 5, 1820.  William enslaved as many as 9 people to work his farm and operate his father’s mill, grinding corn and wheat into usable meal and flour. William died in 1862.

Andrew B. McTeer married Nancy Gamble on December 1, 1842, and the pair had 6 children, William Anderson McTeer, Elizabeth McTeer Gamble, Harriett Caroline McTeer, McCulloch, Mary Martin McTeer Trotter, Alexander Breckinridge McTeer, and Josias Gamble McTeer. He farmed and worked as a blacksmith. On September 18, 1862, he enlisted in the US Army in Maryville, as a private in Co. A., 3rd Regiment Tennessee Cavalry. His son, Will, remembered that his grandfather persuaded Andrew to join the US Army out of a patriotic duty, even though the family benefitted from slavery. He was promoted to 1st lieutenant and quartermaster on November 17, 1863, following Elias Goddard’s muster out. On September 24, 1864, Andrew was captured along with most of the 3rd Tennessee Cavalry during the surrender of Fort Henderson in Athens, Alabama, by Confederate forces under Gen. Nathan Bedford Forrest. He resigned his post because of bilious fever and chronic rheumatism on September 26, 1863, and was paroled to Camp Chase, where he was held until his release on November 13, 1864, at Memphis.  After the war, he served as Ellejoy’s postmaster from 1876 until his death on June 14, 1885. He is buried in Eusebia Cemetery in Blount County. The Grand Army of the Republic Post 89 in Ellejoy was named in his honor.

William Anderson McTeer was born on September 16, 1843, in Blount County, Tennessee, to Andrew Bogle McTeer and Nancy Gamble McTeer. As a teenager, he worked in Alexander McBath’s mercantile store in Ellejoy and helped his father with his blacksmith shop and farm. He stated in his autobiography that he became opposed to slavery after reading Horace Greeley in the New York Tribune, while working in McBath’s store. He enlisted in the US Army on August 10, 1862, in Maryville, joining Co. A. 3rd Regiment Tennessee Cavalry.

In a letter home written in 1863, Will relayed his feelings on the war: “We want to come home to make our friends rejoice that they once more from under the cruelty, the brutality and barbarism of a Satan beguiled rebellion and once more can seek protection under the banner of freedom and that banner held afloat and protected by freemen.”

Will’s service as adjutant meant he handled much of the unit’s paperwork thus the inclusion of many military records in the family’s papers.

Following the war, he started a merchant business with his uncle, Alexander Gamble, Gamble, McTeer & Company, but an infestation of rats and flooding doomed the venture.  In 1868, he ran for and was elected Blount County Circuit Court clerk. While serving as clerk, he read law and was admitted to the bar in 1878. The same year he was appointed United States Commissioner. In 1880, he was elected to the Tennessee House of Representatives, defeating C. R. Love, 1588-866. He only served one term. He served as treasurer and director of Maryville College at various times from the 1872s until 1920s.  McTeer helped organize the Bank of Maryville in 1885 serving as its president from 1902 until 1915. He served as Maryville’s first city recorder from 1907 until 1917.

He married Mary Wilson in 1876 but she died on January 4, 1898, of tuberculosis. He married Lucy Tilden Wilson on August 12, 1903, in Maryville. The pair had one child, Wilson McTeer. In 1917, he was appointed to serve on the local selective service board. Will A. McTeer died on November 7, 1925, and is buried in Magnolia Cemetery in Maryville.

The McTeer-Tilden Family Papers contain many more photographs, documents, and artifacts relating to both the McTeer family of Blount County and the Tilden Family of Grundy County, Illinois.