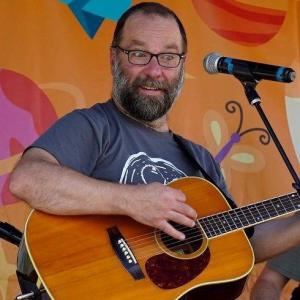 Sean McCollough is a National Parent's Choice Award winner, a children's radio host, a multi-instrumentalist, and a seasoned performer. Library audiences will recognize him from many summer programs and his library song and music video.

He is, in part, cut from the clothe of the likes of Pete Seeger and John McCutcheon with a passion for American folk music and a desire to play music that brings people together. He also loves rock 'n roll, world music, and writing his own songs.

His family shows range from deep dives into the hollers of Appalachia to trips around the world to romps through fun and educational original songs. While guitar and banjo are always on hand, you may also catch him playing mandolin, piano, dulcimer, jaw harp, hand drums, spoons, and more. His shows are participatory at every turn - whether it's singing or banging along, performing motions to go along with songs, or helping to make-up songs on the spot. And while you're having fun, he'll slip in some tidbits about the history of the instruments, the development of musical styles, and basic music education.